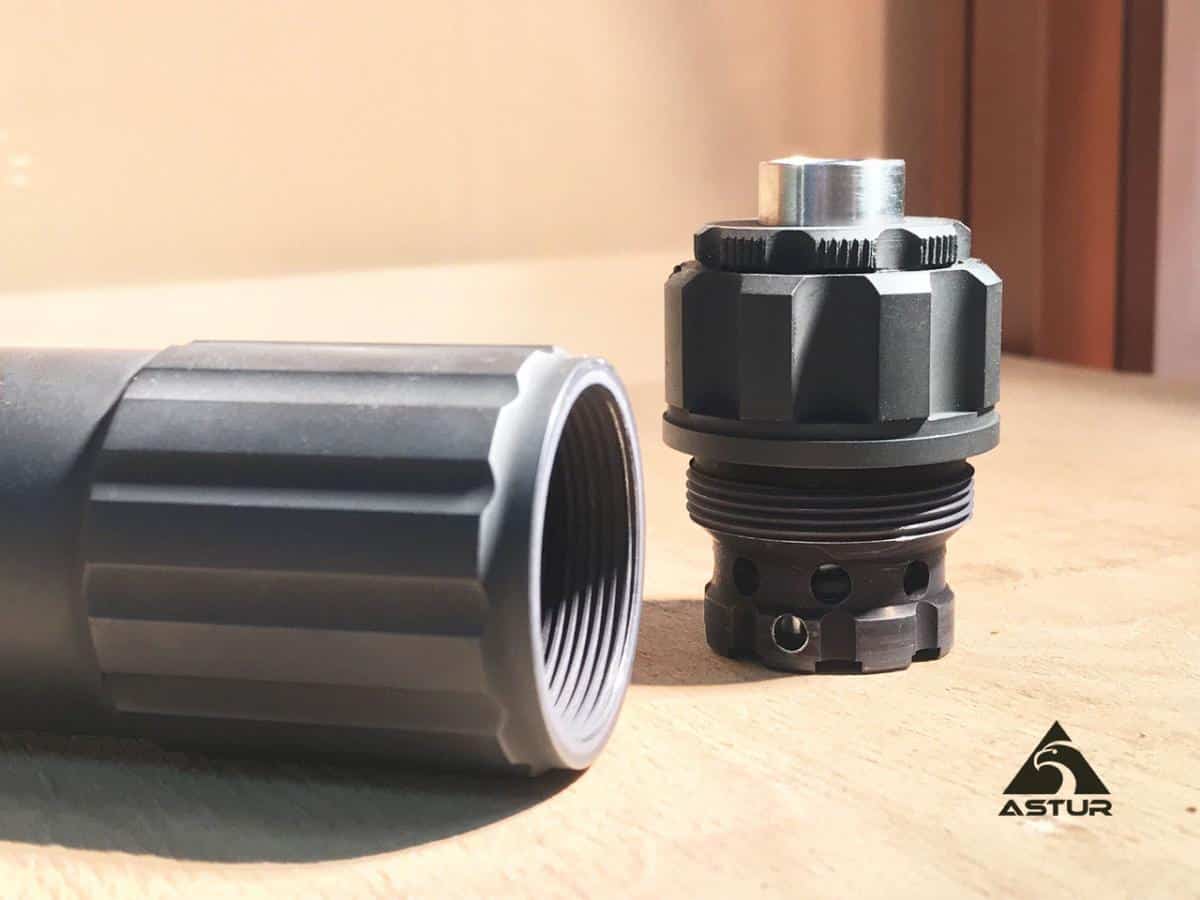 In 2016, our company began mass production of silencers for pistols with a movable barrel (Browning-Petter-SIG locking system) and caliber 9×19 and 9×21.

A GEMTECH silencer was taken as the basis for the design of the device. The device consisted of two parts: a booster and a muffler itself and was almost a complete analogue of the original (dimensions, external design were changed and the internal structure of the muffler body was slightly changed).

We have manufactured this device in two versions: full (inside 6 chambers) and short CQB version (inside 4 chambers).

During the operation of these devices (some of them fired more than 3000 shots), a number of technical shortcomings were revealed, one of which was the unreliability of the booster with a large shot! The threaded part of the booster, the so-called piston (this is the part that is screwed onto the barrel), was made of stainless steel, and the booster body was made of light-alloy material (D16t aviation aluminum) and at a certain shot (according to our experience, after 1000 shots), the piston began work hardening in the booster body. This ultimately led to a decrease in the reliability of the device. In addition, very often, when using a subsonic cartridge, there was not enough “stroke” for adjusting the spring rate in the booster, and the automatic pistol began to work incorrectly.

Due to all of the above reasons, our company decided to discontinue production of this muffler model and a fundamentally new device H9 (Happy Nine) was developed.
This muffler is not a copy of any other device.

The muffler has a built-in booster that can withstand a significant shot and does not require spring adjustments when changing from a supersonic to a subsonic cartridge.

In addition, we have reworked the internal chambers of the muffler: their design was reinforced (to increase the service life) and the milling of the chambers was changed, which significantly improved noise reduction.

The rejection of the booster as a separate part made it possible to increase the number of internal chambers to 7 without changing the dimensions of the device, which also had a positive effect on the level of noise reduction.

The set to the device includes a pouch for storing and carrying the muffler and a special key, with which the device can be completely disassembled and cleaned.

All light-alloy parts of the device undergo a chemical anodizing process, which significantly increases their service life.

The devices are manufactured for all standard types of barrel threads.